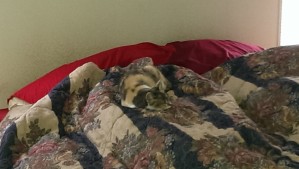 This is Abbi.  Or was.  We got her for my youngest son many years ago after his pet rabbit died.  He said he didn’t want another rabbit because they die too easily.  So we went to a rescue place and she won our hearts.  Her full name was Abigarrada, which in Spanish means ‘varigated’ and as a calico she certainly was that!

Her other name was usually “Pissy Girl” which should give a clue as to her personality…we often joked that she was Liz Taylor reincarnated (though Liz lives still).  Attitude was present in elephant size for this little body!

She was very very smart, too.  We used to have our extra dining room chairs next to the front door and the master bedroom door.  Well we had to move them because she figured out how to stand on the chairs and use both paws to open them.  Since this was before we had a screen door, she would get out – and if we didn’t know it, we would (of course) close the door and she would be stuck out there til we let her back in.  She, of course, would be quite miffed that the door didn’t magically open for her at her desire to come back in and would cop QUITE the attitude when she did get back in.

She learned English, which probably isn’t so surprising; I suspect most pets do if they’re at all bonded with their owners.  What was surprising was that she ALSO learned to spell.  For nearly 17 years we would give her a little half and half every morning when we got it out to put it in our coffee.  Naturally she came to expect it, and to ask for it by name:  milk.  (she actually said mawk, or maak)  She became such a pest about milk that we had to start spelling it when we were talking about it for any reason.  THEN she put two and two together and realized that M-I-L-K was the same thing!  So we had to start spelling it backwards.  For some reason she never did figure that one out, though it’s most likely because once we realized she knew when we were spelling it we got a lot more circumspect about discussing her “drug of choice” when she was around.  She knew other words too and could say them with varying degrees of clarity:  out, mom or mama (she literally called me this), up, treat (every treat was maak), and night-night (some weird ngy ngy sort of word).

She was heartbroken when youngest son moved away and would stand in front of his door yowling for him for hours.  It was very sad and we learned not to say his name so as not to provoke another outburst.  She eventually seemed to get over it and I became her number one human.

About 8 months ago Mr. TF said to me that she is getting to be quite geriatric.  I hadn’t noticed, to be honest.  She was just my little pest, my little minion, always nearby or behind my shoulders if I’m on the couch, behind my head if I’m in the easy chair, next to my head or on my chest if I’m in bed.  So I watched.  And he was right.  Some time after that she quit jumping to the top of the refrigerator, and a few months after that she started having trouble jumping on the kitchen island directly – she could jump to the chair then to the table then to the island, but straight there seemed to be out of her capability.

Last month she started vomiting every time she ate, and she was losing a lot of weight – and she was never a heavy cat to begin with.  Mr. TF did some research and began treating her for a hairball.  She puked up two huge ones and then she really seemed to rebound to her old self.  She even became as sociable as she had been when she was young and came out to greet visitors.

We went camping over Halloween weekend and when we came home she was alert, happy to see us, and gave her usual coo of affection when I scratched her ears.  She really seemed happy and healthy, like we had underestimated her.

Then, Monday at 1130pm, she woke me out of a sound sleep.  “MAMAMAMAMAMAAAAA!”  Over and over again.  I knew there was something wrong, I could hear it in her voice.  I finally found her, on the floor practically under my dresser.  She quit crying out as soon as I touched her but I could tell there was something wrong.  I picked her up and I knew she was dying as soon as I did.  She was struggling for air, she had dried poop on her bottom, and she was wheezing and limp.  I turned on the light and called for Mr. TF to wake up.  We had a tense discussion over what to do and he stayed with her while I spent FAR too much time trying to find a vet office we could take her to at this late hour in our rural area.

It was the longest ride to the vet’s office I think I’ve ever had.  Mr. TF drove, I had Abbi in the cat carrier in my lap with it open so I could stroke her head and try to reassure her.  A sheriff’s deputy made a U turn and followed us for a couple of miles – I prayed to who ever might be listening for him not to pull us over.  We weren’t speeding but a car out that late on a weeknight is definitely grounds for investigation, I can see his point, but not now, please not now.  Thankfully he didn’t.

She began seizing right after we got to the vet’s office, I had already called them to alert them and told them we just want to euthanize her, she’s old and we know it’s beyond hope, we just can’t bear to see her suffering.  They scooped and ran with her, and gave her oxygen to stop the seizures while they started an IV.  I know she was beyond hurting at that point but I am so glad they did that.  When they gave her the medicine I was there, stroking her head and scratching her ears the whole time.  It was a true relief to see her take her last breath and relax at last.  And so very sad.  I honestly had not realized how very much I cared for her.  I’ve never been much on pets as family members.  Now I wish I had paid more attention to her in her final months.

They were also kind enough to keep her in their cooler until we could dig her grave.  Mr. TF and I may disagree on many things but this was definitely not one of them.  She was coming home, she was not being cremated, and we were going to make a place for her.

I dug her grave Tuesday night after I got off work, in the front yard in view of the window she used to sit in and watch for birds, under our mulberry tree.  It seemed fitting that it was raining; I was grateful for it since the ground was softer and easier to dig – we have clay and calechi (look it up) so it wasn’t as hard as it might have been though I did have to use the pick and mattock.

Wednesday we buried her; the next door neighbor was kind enough to take her out of the plastic they had her wrapped in and wrapped her in a towel.  We buried her with a toy and a bowl of milk.  We didn’t say anything.  It’s too new, too raw.

We plan to paint her name on the center stone later this year or after it warms up again next.  I’m glad she’s home.  And I’m glad she’s not suffering any more.  The vet said her kidneys were probably failing and that’s why the loss of weight, the vomiting, and, in the end, the fluid filling her lungs.

So what does the title of this post have to do with working for Hel?  Well, I have spent most of the last quarter century dealing with people’s last days in some fashion or another; my husband is a hospice nurse and also spent most of the last quarter century dealing with the same.  We have spent a lot of time in the company of death.  So this blog post by Darksarkasm really hit home for me. I hadn’t thought of my intense desire to end Abbi’s suffering as work for Hel, but I suppose in its way it was. As was digging her grave.

Goodbye Abbi. Welcome home. You will nourish the tree and live in our hearts.