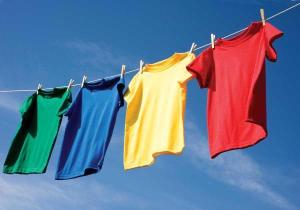 I live in a state with many, many, MANY Home Owner’s Associations (HOA’s).  There have been fights brought to court because the boards of many HOA’s consider solar panels to be ‘unsightly’ and banned.  This, even though we live in a state with something like 320 days of sunlight a year.  This, even though Arizona law trumps HOA rules.  In all of these cases that went to court, the right of the homeowner to have solar panels was upheld, because Arizona law gives the right to the use of solar to the homeowner without interference.  Yay Arizona courts!  And yet, in many, if not most, of these same communities, use of a clothesline is banned by the same ‘unsightly’ rule.

Well guess what???  Those rules are illegal and unenforceable too, under the same laws that give the right to the use of solar panels.  ARS Article 3 Chapter 4 Section 33-349

A.  Any covenant, restriction, or condition contained in any deed, contract, security agreement or other instrument affecting the transfer or sale of, or any interest in, real property which effectively prohibits the installation and use of a solar energy device as defined in Section 44-1761 is void and unenforceable.

I looked for section 44-1761 and unfortunately was unable to find it.  you are welcome to look HERE if you are interested.  Now in the interest of disclosure, if you bought your property before 1980 this isn’t applicable to you, and any HOA regulations dating from before 1980 ARE in fact enforceable.

ETA:  found it.  Google is my friend.

In this article, unless the context otherwise requires:

1. “Collector” means a component of a solar energy device that is used to absorb solar radiation, convert it to heat or electricity and transfer the heat to a heat transfer fluid or to storage.

2. “Heat exchanger” means a component of a solar energy device that is used to transfer heat from one fluid to another.

3. “Solar daylighting” means a device specifically designed to capture and redirect the visible portion of the solar beam spectrum, while controlling the infrared portion, for use in illuminating interior building spaces in lieu of artificial lighting.

4. “Solar energy device” means a system or series of mechanisms designed primarily to provide heating, to provide cooling, to produce electrical power, to produce mechanical power, to provide solar daylighting or to provide any combination of the foregoing by means of collecting and transferring solar generated energy into such uses either by active or passive means. Such systems may also have the capability of storing such energy for future utilization. Passive systems shall clearly be designed as a solar energy device such as a trombe wall and not merely a part of a normal structure such as a window.

5. “Storage unit” means a component of a solar energy device that is used to store solar generated electricity or heat for later use.

Clotheslines are specifically a device to produce mechanical power — they cause water to evaporate from clothes via solar energy.  So.  For the great majority of us, clotheslines ahoy! Full sail ahead!

Leave a Reply to The Zero-Waste Chef Cancel reply