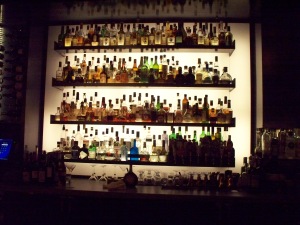 1.  Bartenders aren’t expected to work 12 hour shifts.  If they’re on their feet, it’s for 8 hours or less.  Because employers understand that you can’t hump it for longer and be efficient and quick to serve the customer if you’re exhausted.

2.  Bartenders aren’t expected to also be maids, personal chefs, janitors, etc while they’re serving drinks.  While they may called on to function as lay psychiatrists and clergy, people don’t file complaints when bartenders are too busy with other customers’ drinks to give advice/comfort.

3.  When bartenders give advice, people don’t take it for anything other than personal advice.  They don’t sue bartenders for malpractice and bartenders don’t lose licenses over it.

4.  As a rule, most doctors respect bartenders and their contributions to society.  Even when bartenders give advice, doctors don’t view it as encroaching on their territory.  And they don’t think bartenders are their personal servants, just bringers of drinks.

5.  Bartenders aren’t expected to take their work home to finish if there are customers waiting when the shift is over.  Because employers understand that bartending is a job, not an all consuming career.  Bartenders don’t have to make phone calls for support services or follow up with other disciplines on their own time, and they don’t have to finish paperwork at home because they were too busy seeing customers during their shift, or because the computers were down at work.

6.  The boss doesn’t demand that the bartender give all their free time to being available for extra shifts, nor do they demand mandatory overtime, nor do they have to be on call for an emergency after hours drink.

7.  Bartenders don’t have to maintain special certifications and formal continuing education in order to tend bar.  While they do have to keep up on new drink recipes, no one is going to take away their job if they have to look it up once in a while.

8.  Bartenders aren’t at high risk of contracting deadly diseases in the course of performing their jobs.  You don’t generally get hepatitis as a result of tending bar.  You might get the flu or a cold though.

9.  Bartenders aren’t generally expected to wear white pants and shoes.  That is just the dumbest thing ever for either bartending or nursing.  White?  Really?  Enough said.

10.  Bartenders don’t generally collapse from work related stress.  If they burn out, no one condemns them as weak or unprofessional.

And finally, the best reason:

11.  Bartenders can actually make almost as much money as nurses.  Of course, they need to be at a busy bar, with a large customer base, but it’s most definitely possible.

Yes, I know this is simplistic.  Yes, I know you could probably argue with many of these.  And no, I don’t think doctors generally view nurses less than respectfully.  But there are a minority, big enough to notice, who do.

I like nursing, I really do.  The problem is that nursing is not really about nursing any more.  Some of that is good, much of it is bad.  When money rules everything, people suffer, plain and simple.

Have a good day.