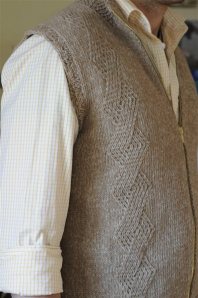 I knitted a vest similar to this for my middle son.  He tried it on in September, not knowing it was for him, and said it would be perfect if it had pockets.  *sigh*  I agree with this assessment, unfortunately, but didn’t even begin to think of it when I was knitting.

Elizabeth Zimmermann who in my opinion is the Mother of Modern Knitting, had this same dilemma.  So she created what she called the “afterthought pocket” in which you *GASP* snip a stitch in the center of where you want the pocket to go, unravel to the correct size and pick up the now live stitches top and bottom on knitting needles, and proceed to knit a pocket on the inside of the sweater.  I have to line the pocket with fabric as well, because the fabric isn’t firm enough to support actually putting anything other than one’s hands in the pockets.  The problems with this for me are:

1.  I didn’t knit it with wool.  I knitted it with a better quality acrylic/superwash wool blend (blech), so it could be thrown in the washer and dryer without hassle.  This means that, unlike with wool, it won’t full at all, and if I unravel and don’t weave the ends in extremely well, the first time it gets thrown in the washer it will come out with holes where it’s unravelled.  and

2.  I didn’t follow the pattern exactly, but I wasn’t sure exactly what was going on so I followed the stitch numbers on each side of the fronts, which are different.  So the measurements for the pockets are going to involve complicated calculations of gauge so each pocket is the same width.

I have terrible anxiety about snipping stitches in a non real wool yarn!    I practically never knit anything with anything other than either hand spun or good quality real natural fibers; this was a fluke – I had purchased the yarn for another project for a different family member but couldn’t bring myself to actually use it.  It turned out to be a good choice for this vest and I had to use it up anyway, so there we are.  My family members’ aversion to actual wool, because of their aversion to hand washing, is just puzzling.  Yes, it might take a little more care, but for a garment that will last as long as you want to keep wearing it, why wouldn’t you wash it once or twice a year?  For the ones that are local to me, I even told them to give it back when they want it washed so I know it gets done right.

The job is still on a learning curve.  But it’s fun.  And school is stressful but that’s me putting expectations on myself more so than the actual work — except for the weeks I am on call!  I have to be on call for a solid week at a time for this job, and that means I end up working full days every weekend in addition to the regular week…which means I get no home work done and have no time to recuperate from the week.  That’s supposed to be changing soon — I will still be on call but hopefully the load of regular weekly duties will be lightened a little as they just hired another person who will be doing much of the driving stuff.