The knitting is not finished, but there’s nothing more I can do at this hour; each person has a gift.  The presents are not all mailed, but I can’t do anything about it until Monday; I forgot a critical item when we went to the post office in town.  The presents here are not all wrapped, but we will finish that shortly.  The cookies, pies, breads, and cakes are not all baked, but I will get up early tomorrow and do what I can.  And yet, in spite of all this, I do not feel stressed.  Nor guilty, nor sad.  I truly gave up on making everything perfect and settled for the good this year.  Plus, we will have our family over for Christmas – and both Mr. TF and I have the actual day off for the first time in maybe a decade – and we will celebrate together.

May your day be blessed and may you look forward to the returning of the light!

Just no time to post.  Too much holiday knitting, spinning, weaving, and the dreaded working going on.

Well, I had a wood stove contractor come and give us a quote on the purchase and installation of a new wood stove last May.  DH said that was too much money, and we needed to find a cheaper way.  So I started surfing Craigslist.

In August, I finally found a wood stove that was mobile home approved, for half the cost of new, bought it, and brought it home.  I thought, no problem, there are lots of people out of work and surely there will be a contractor who will install this for us.  We didn’t plan to cheat anyone; I knew from the quote how much the rest of the parts and installation were going to be and figured I had saved $500 at least by buying a used stove so that was our savings.  Well, that led to a months long saga with many disappointments and frustrations.

First, the man we bought our range from was a contractor.  I contacted him, he came out and gave us a quote, took me to Home Depot to buy most of the parts, left a list at the local wood stove store (where the first contractor came from with the original quote), and set date to install it.  No show.  He said he had a family emergency.  So we set another date.  No show.  Again, family emergency.  Third date.  No show.  This time he had someone else call us who was not a contractor to see if we wanted him to install it.  The answer was “no” both because he was not a contractor and because his bid was outrageous.

We both started calling around to contractors listed in the area who do wood stove installs.  I got a quote that was very reasonable, but they required me to build the pedestal; I was OK with this but Mr. Tin Foil was not, so he kept looking.  He called a local guy recommended by one of his HAM radio buddies.  This guy came out spent most of his time yelling at his hearing impaired son while giving Mr. TF his quote (note: he was not yelling at the kid because he was hard of hearing, he was yelling at the kid because the dad is an ass.  Read on.)  The quote was also outrageous; when Mr. TF asked him about it, he became defensive but did agree to renegotiate the price.  Ultimately, he and Mr. TF got into a shouting match on the phone later that evening, the contractor threatened to come over and kick Mr. TF’s ass, and hung up on him.  He came over a few days later because he had left his notebook at our house.  He was unapologetic and said “Look.  I charge $1000 per day for me and my guys for any job.  This job will take two days, it’s $2000.  Take it or leave it.”  I started laughing and told him we would leave it, thank you (I believe I may have also said something to the effect that he was smoking crack but I could be mistaken, I may have just thought it).  So on to the search for another contractor.

Mr. TF was very insistent he wanted someone licensed to install it due to the fact that we would have a hole cut in the roof.  Finally he realized that, even though the economy is bad, contractors in general have gotten very cocky and lazy, and think they can completely run the show and get whatever price they ask because they’re in so much demand, and dictate their own hours and just not show up if they don’t feel like it – even though that’s no longer the case.  So I mentioned our friend D.  I had mentioned him earlier, but as I said Mr. TF really wanted a licensed contractor so I didn’t press the issue; he had a very good point and at that point we were still hopeful we could find someone both licensed AND reliable who would install it.

D. came over and gave us a quote that was several hundred dollars UNDER what I had budgeted for the installation.  Now, we’ve been to D’s house many times.  He built an entire addition onto their house and built the fireplace in that addition as well as had done all the tile work.  I knew he did good work, I had seen it myself.  We set a loose date – my only request was that it be done by Thanksgiving because we were having family stay with us.  That agreed, I waited with anticipation for the install.

Poor D!  The two day install took SIX!  He decided on day one that he was going to build the pedestal at his house because he wanted to rip the 2 x 6 boards so the tile would fit EXACTLY.  That took an extra day.  Some of the parts the original contractor had sent me to get were not compatible with other parts he had sent me to get at the wood stove store.  Both Mr. TF and I had to run to the store several times for parts – including the box that goes in the ceiling that connects the double wall pipe with the triple wall pipe – because the box I had purchased was for an entirely different brand, which we didn’t find out until the hole had already been cut and the box installed.  Since the box had to be cut up to fit properly (this is normal) I couldn’t take it back – $79 down the drain.  The new box I got was the wrong length so Mr. TF had to go back to get the right one; the flashing and storm cover was the wrong size and we had to go to yet a third store for one the right size.  The pipes were the same manufacturer but different brands and we had issues with them fitting together; Mr. TF had to go back to the wood stove store for the right part to connect the two.  Finally, at 10 pm on day six, it was officially installed and ready for inspection by the county.  That was the easiest part of the whole thing – you call a computerized line and make a request and they come out the next day to inspect.  Mr. TF was here for that and he said the inspector was very impressed and passed it right away.

Then came the learning curve with using it!  We were having serious issues with smoke rolling out into the house when trying to light it; I set off the smoke detector three times. Then we couldn’t keep it lit; even with the damper fully open and with the fresh air kit (required) being installed there was obviously a draft problem.   Finally we both remembered at the same time that there is a plate on the back of the stove at the base that comes off – Mr. TF took it off and voila – no more draft problem.  After a week of trying we finally managed to get a good fire going and to relight it without difficulty.  I came home last night at 11pm to a lovely fire and a warm house – 72 degrees!  That is the warmest it’s been since the cold snap started, and the warmest it’s been since we quit using the central heating 5 years ago.  Hooray!

Now I just have to figure out how to cook on the top – I need to get another thermometer because I broke my old one, but it was up to 160 degrees the first day we tried to get a fire going.  If it gets hotter than that now that we know what we’re doing we’re in business for soups and bread for sure.

I’m feeling better and better about our security from infrastructure issues.  We’re not ideal by any means, but every step we take gets us a little closer.  Every step we take off the grid means less money we have to depend on for those things. 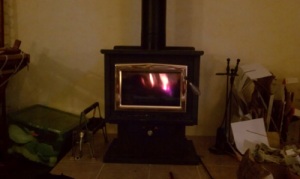 (ignore the box of handspun on the left)