Things have been quiet on the blog, but they’ve been humming along here.

First of all, you must be wondering what the Tour de Fleece is…well, it’s a worldwide phenomenon.  It takes place every year on the same dates as the Tour de France.  We spin every day that the Tour rides, and have special challenges along the way like the Tour riders do.  For instance, there’s a speed stage – how many yards/ounces can you spin in one day?  For the mountain stage, we do special challenges — if you’ve never attempted spinning bamboo, this would be a perfect opportunity to try.  There are teams you can join on Ravelry.  I belong to two teams:  Team Russian Underpants (sponsored by the Antique Spinning Wheels group) and Team Bring Me a Shrubbery (sponsored by the Knitters Who Say ‘Ni’ group).  You set your own goals for every stage of the Tour, and you are basically only competing with yourself, but you do that along with thousands of other spinners all over the world.  It’s a lot of fun, and makes me wish the Tour was more often than once a year.  My goal was to spin every day, at least for a few minutes.  I have not accomplished this goal, but I have gotten quite a bit of spinning accomplished.  I had a tragic accident with Ms. Grace on the third day of the Tour which required major surgery; she is not without scars after my botched surgical repairs. 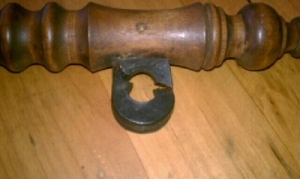 My temporary repair (which worked, but was more than a little rickety):

New leather – this involved exacto knives of various sizes, dremel tools, a drill, neatsfoot oil, needle nosed pliers, a trip to Flagstaff to the leather store, a full week of trying to get that leather out, many swear words. 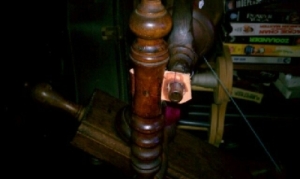 This is a poor repair, and I should be embarrassed to post the photo, but I am proud of myself that I actually accomplished a repair on something well over 100 years old.  It’s not perfect, and as restoration goes it’s not even OK, but I didn’t break the maiden (the wood post) and I didn’t affect the functioning of the wheel.  I am happy to once again spin on my workhorse!  I will fix it better eventually, but this repair will last me for quite a while.

I’ve also finished a pair of kilt hose for someone with a 10 inch circumference foot and 17 inch circumference calves.  I think there were enough stitches in those hose for two entire sweaters!  They were a commission and I was so very worried I wouldn’t get them done in time; I even had to put out a nationwide plea for matching yarn to finish the cuffs because the four skeins I had weren’t enough, and the stores don’t carry that yarn in anything but colors now.  No white.

Not very pretty just laying there, but MOST attractive on the wearer.  Thankfully.  I had nightmares they weren’t going to fit, even though I measured both him and the hose throughout the process!

Mr. TF and I went to the Arizona Celtic Highland Games in Flagstaff this past weekend.  Below is what I think is the best shot of the festival: 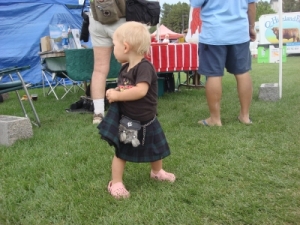 Isn’t that the most adorable sporran you’ve ever seen???

In other news, I interviewed for a Master’s Program in Family Nurse Practitioner this past week.  Today I found out I was accepted…but I am on a waiting list and my tentative start date is EIGHT TO TEN MONTHS from now.  Apparently they’ve been overrun with applications due to the upcoming change to requiring a doctorate by the NP licensing board.  Hopefully enough people get in at other programs that I don’t have to wait that long.

That’s about it.  Just working on my business (like spinning or weaving is work – yet), cleaning and organizing, and taking it easy.  Trying not to think about what will come next, because that makes my stomach knot up and my heart race.