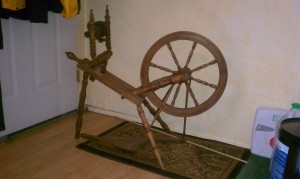 I spin my own yarns; I learned to spin in 2002 but didn’t get serious about it until 2005.  I became interested in spinning after I began knitting regularly again; quality yarns aren’t cheap, and the only way I could afford the kinds of yarn I wanted to knit with was to learn to spin my own.  I began my spinning journey with a very modern wheel which as with many things modern, looks pretty cool, seems like it’s a good idea, but just doesn’t hold up to actual use.  In fact, it mostly sat in my living room because I had such a difficult time actually spinning with it.  It required a large brick wedged behind it to keep it from creeping across the floor because it’s so light, and the type of tension mechanism on the bobbin meant that for me as a beginner, once I filled that bobbin I was never going to get the tension the same for the next one.   In 2005  I took my spinning wheel, that PVC Babe, with me every Wednesday for six weeks to a “learn to spin” class in Mesa.  That is how I learned that while a $200 wheel *can* be a good bargain — if it’s the right one — it was not a good bargain for me because I really didn’t like this wheel.  So, once again, that wheel sat in the corner, neglected and unloved, while I finished up school and dreamed of spinning with a ‘real’ wheel.

Now, I do respect the contributions of modern technology.  Antibiotics are literally life savers, and I probably wouldn’t be here today if they weren’t around; a good many of the people I know today would also be either dead or handicapped in some way without antibiotics.  But, as with any technology, it can and has been misused and overused, and the downsides we are beginning to see today.  Spinning wheels today are also the product of modern technology; many makers have devoted a lot of time and effort into producing a wheel that utilizes the best engineering designs one can think of to produce wheels that are light, clean looking, and give spinners features they desire.  Spinolution is one such company.

So, when I decided that the problem was indeed, the wheel and not my inability to spin, I began doing research.  I initially decided I was not interested in an antique wheel, because I didn’t know enough about how wheels worked in general to know how to fix one, and I didn’t yet know there was a HUGE spinning and weaving guild right in my neighborhood.  I also didn’t think I was interested in a traditional style of wheel (like what you think of when you think of a wheel probably) because I wanted something small and light that I could get out and put in the corner when I was done.  I wanted a wheel that would be easy to spin on, without a lot of gadgets or requiring constant fiddling, and I didn’t want to have to change bobbins very often.  When I completed my research, I went to the newly discovered local fiber store, and there was a Mach 1 there as a display, just waiting for me to try out.  I went home with that wheel a week later, convinced I had eluded all possible spinning related problems — it was already finished, so no warping; it had sealed bearings, so no oiling; it had a carry handle and wheels, so easy movement; HUGE bobbins so no frequent changes.

Three years later, I realized that buying a wheel that looks and spins NOTHING like many traditional wheels doesn’t mean I avoided spinning related – rather, technology related – problems.  The unique treadle design whereupon the double treadle is a unit, and the wheel has an offset pittman arm, is warping AWAY from the pittman arm and I have already put spacers in it to try to correct for that.  It is getting worse, and eventually I may not be able to treadle at all.  Those ginormous bobbins I was so happy about?  Well, they’re so heavy that I have frequent breaks in my yarn while plying.  Plus, I can’t fill them more than half way if I’m going to do certain types of plying because the finished yarn doesn’t all fit on the bobbin if I do. To make matters worse, the drive band is rubber and I’ve been through SEVEN  of them in the three years I’ve had the wheel!  Now, for someone concerned about TEOTAWTKI this was a really poor choice for a wheel, which I hadn’t realized when I bought it.   This and other problems sent me on a quest to learn exactly HOW my spinning wheel worked, how it was similar to others and how it was different, and how traditional wheels (and those based on traditional designs) overcome those problems.  In the course of my research, I realized that many of the problems I was experiencing did not exist in traditional wheels, and that they were designed the way they were for very good and sound engineering principles, time tested from the Middle Ages until the present.

Enter the beauty above.  She is an antique.  Her table — the slanty piece of wood — is solid oak, with tiny little fluted designs like a pie crust on each end.  The turnings are maple, I believe; I don’t know for sure but that was a very common type of wood for turnings (the legs, axle arms, etc).  She was probably made in the Midwest and brought out here in the late 1800’s; she was a Chandler based wheel for at least the last 70 years, so I assume she came out with Mormon pioneers from Nebraska or something like that.  She was purchased in the late 40’s or early 50’s by a woman in Chandler who passed down to her daughter, who passed it to her daughter.  The first two generations of women used it for decoration, never to spin, but she was in a climate controlled home, with regular dusting and occasional waxing, for all those years.  I bought it from the 3rd generation woman to have it, who didn’t want it – it didn’t fit with her decor.  I couldn’t believe it when I saw her, but she was in good working order other than some minor issues and I paid a very reasonable price for her.

Her flyer – the part that holds the bobbin, and has a profile like a bird in flight had a large crack on one side, and the hooks that hold the yarn were rusted through.

Luckily, this is only on one side, and I was able to remove and replace the hooks on the other.  Her bobbin was glued to the flyer shaft because of years of dried oil and shellac mixing with dirt, but I was able to free it, clean it, and restore it to working order in a matter of two days of alcohol, Q tips, elbow grease, and a dremel tool with a grinding attachment (to help ream out the dried stuff from the inside of the bobbin hole).  Several coats of Feed N Wax later, and the addition of a drive belt made from crochet cotton, she was ready and willing to spin. She’s not a wheel for a beginner, and I finally know enough and have enough skill to be up to the challenge of a wheel like her.

It was truly an awesome and eery feeling to know that I was the first person in probably 70 years to spin on her.  The wheel probably spun enough yarn and flax to clothe a family for a lifetime, and then sat for a lifetime.  She’ll be well taken care of here, and put to work as she was designed.  The small bobbin problem I was so afraid of is compounded by the fact that she only has one — so I will need to be creative in my solutions for that.  There are solutions, though.   I have learned more about spinning wheel technology and workings in the last month than I learned in the last 10.

Oh, and one more wheel:  Henrietta.  I bought her at an antique store right after I got Miss Saxony (reference to the style of wheel) thinking that I could swap flyers and have an extra bobbin.  Nope.  Nice try though.  So now I have a true flax wheel with a distaff (holds flax for spinning) that can also double as a travel wheel, because she’s so light.

She’s a cute little thing, but she doesn’t capture my heart the way Miss Saxony does.  She’s in good shape minus a few minor problems, and she spins wool not so well, but I can’t wait to try flax on her.  She is a true flax wheel and doesn’t want to spin wool – the flyer doesn’t spin fast enough to put enough twist in the wool to hold it together.  Flax is such a long fiber it doesn’t need very much twist.

So that’s my journey on the technology path of spinning.  I started out completely high tech, and have ended up completely traditional.  I plan to keep my Mach 1, and hopefully I can get her fixed, and she’ll end up being my plying wheel for sure.  Those ginormous bobbins will be good for something!