I waited months longer this year, three months to be exact, to plant because last year I had leggy overgrown plants and I had to start over last year after a late and heavy frost.  I feel behind this year.

In the left pot is a couple of Bocking 14 comfrey plants; the back is lavender, and the two right are rhubarb.  I found out by accident that while rhubarb dies in the ground here, it does wonderfully well in deep pots.  Who knew?  I’m looking forward to rhubarb pie finally.  And the leaves won’t be wasted even though they’re poisonous, they’re a good dye plant.  Yay! 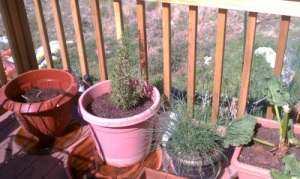 Far left is more Bocking 14 comfrey; they were supposed to send me six plants but I got 8, hence the two in the other pot.  These are only temporarily in the pots until I dig and compost near the fence where they’ll be permanently situated.

Next left is rosemary, to replace the rosemary that died; next to that is chives, and far right is my rhubarb plant which is so happy it was even trying to blossom until I snipped it off…I want leaf stalks, not flowers!  It tends not to produce as much edible foliage if it is allowed to flower, and it also does not tend to produce viable seed due to its long history of cultivation via splitting the root bunch. 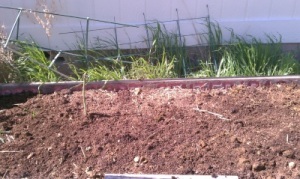 My asparagus bed.  The chickens, when they accidentally ‘got free’ without supervision, dug up my asparagus roots over the winter and I thought they had killed them all.  I just planted more, so the entire bed is now dedicated to asparagus; happily, I found when I was trenching for the new plants, that they had killed fewer of the established plants than I had thought.  That is good, because we have been dedicatedly NOT eating the asparagus for the last three years, patiently waiting for it to get firmly established before we began gorging ourselves.

What else was planted today?  A 4 x 4 bed of carrots, hopefully that will mature and be out of the bed before I need it in June.  Lettuce, turnip greens, green pepper, roma tomatoes, cherry tomatoes, green chiles, and orach.

The white eggplant I think are done; being stepped on was not a good experience for them.  I transplanted them from the little peat buttons into compost in the hope they’ll do better; we’ll see.  More of the purple survived the trauma and they tend to produce better anyway in my experience.  We’ll see how it goes; I still have time and I may just plant another six or so to cover my bets.

One loofa seed from my Christmas loofa gift basket has sprouted!  I got a basket with soaps and a loofa from the Guild Christmas exchange.  I planted the four seeds that were left inside it and I wasn’t expecting anything at all so that was a fantastic surprise.  I got more loofa seed anyway just in case.  A plant that is edible and is useful as a scrubby?  How can you go wrong?

I’m pleasantly tired, and very dirty.  If only this wind would stop!  I’m starting to understand why settlers in Wyoming went mad from the wind.