This is my new loom.  I acquired it yesterday, and it is still sitting in the same place in the driveway as it is too heavy (and too bulky) to get up the stairs of the deck and into the front door.  It’s covered with tarps because the monsoons are here (yay!!) finally, and it rained yesterday.

It has an approximate 45 inch weaving width; I haven’t measured it yet but it’s a little larger than a yard across so that’s what I’m guessing.  Also, from the research I’ve done, that’s the ‘standard’ width for these machines.

It’s a loom designed for making rugs and blankets, but you can make other things as well.  It has a unique operating mechanism — as you can see from the picture, it has no foot treadles.  That’s because it is a ‘semi automatic’ loom.  There are interchangeable cams that create the weaving pattern by changing the thread pattern as you move the beater bar forward and back.  Supposedly this loom also came with a shuttle that would race across as you moved the beater as well.  This loom does not include that, as far as I can presently tell from the box of accessories. 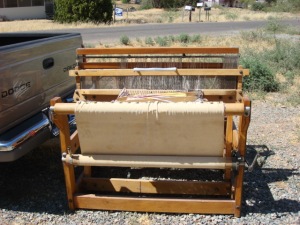 Unfortunately, the loom only came with the cams that are presently on it; I have sent out several emails to people listed on the internet who might have access to parts or know of someone who does.

I was able to find a pdf link via the University of Arizona (go Cats!) for the loom manual circa 1910.  This might seem pretty old, but this particular loom was patented and manufactured by the Newcomb Loom Company from the 1800’s through 1983 without anything other than minor changes.  There were over 35,000 made, and one can tell the age by the serial number (I haven’t researched that yet).

What did I pay for this?  $65 approximately plus a day of time.  $40 for gas for my FIL’s truck, $20 for lunch, $5 for the pdf file to be printed and bound at Staples.  So I figure, like with my other loom, if it costs money for replacement parts, I’m still ahead of the game.  The family offering it on Craigslist basically just wanted it out of their garage.  I was happy to comply.

Well, off to work with my tools to start disassembling.  Thankfully the manual includes, on the back cover, “how to get the loom into the house” directions for partial disassembly.