Yesterday I realized that my marriage is pretty well done.  It was a revelation to realize that yes, there really is a point of no return and I think I have crossed it.  I haven’t been happy for years; Mr. Tin Foil Hat chooses jobs that require him to be gone from home for cumulatively large blocks of time, and drops everything to go on unscheduled trips frequently.  This is a pattern that was also prominently featured in his parents’ marriage.   When he is home, he is emotionally unavailable on my days off, and since I work 3 – 4 days per week, and am gone for 14 -15 hours a day when I do work, we don’t see each other much.  We have had problems in the past, and have tried to work things out, but at most the fixes last about 3 weeks and then it’s back to the same ole.   He once again says he’ll change, that he loves me, that we can work it out…but I’ve heard it all before.  I have no hope it will change, that it will work out, that he’ll ever ACT like he loves me as much as he says he does.  Do I want a divorce?  Realistically, no.  Its financially and emotionally very costly.  Do I want to stay in a marriage like this one?  No.  This might be great for him, but it’s literally killing me.  I can’t carry this burden anymore.  So, on this happy note, we packed up and drove to our friends’ house for what should have been a fun day with friends and animals.

Above is my friend Dana, holding a kid that was being born as we arrived at their house yesterday.  He was a big guy, and had to be pulled from his mother as he got a little ‘stuck’ with that big head.  He was very vigorous, and up walking within minutes after being dried off, and nursing not long after that. 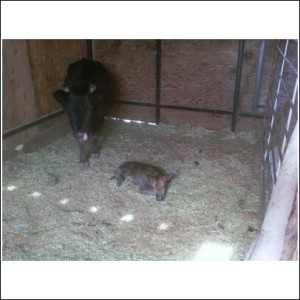 This is MaryAnn, a Dexter cow, and her calf which was born during a surprise driving snowstorm (really!) at about 230 yesterday afternoon, right before we arrived at the farm.

The calf is a female, and just didn’t seem to be doing very well.  She was dried, warmed, stimulated, but just wouldn’t stand or latch on.  MaryAnn was restless, and couldn’t stand still; the guinea hens were curious to see the proceedings as were the dogs, both of which MaryAnn was determinedly protecting her calf against.  Dana decided to let mama and baby be for a little, and to check on her again at evening feeding time.

When we all went back down to check on the little girl at feeding time, she was NOT doing better, her eyes were rolled back into her head, and she was really limp.  Dana and Dean sprang into action, rubbing her to warm her, trying to assist her to stand, holding MaryAnn so the calf would have a better chance of latching on…all to no avail.  They milked mama and bottle fed the baby which seemed to rally her a little, but still no ability to stand or walk.  It was decided to bring down a portable space heater so that she could warm up, as she was still very cold and not even shivering much.  The barn was blocked off with a piece of plywood to keep the heat in, and a blanket was placed under the calf which was placed in front of the radiant heater.

We all went back down to check at about nine pm.  Bad news.  The kid was dead; he had apparently slipped out through a small hole in the pen and gotten into one of the horse stalls, where he was promptly stepped on and crushed.  He was still warm so it had just happened not very long before.  The calf though was sleeping normally, no longer shivering, and mostly warm except for her ankles.  Then ensued an hour long attempt to get her to latch onto mom, which mom was by now having no part of; her udder was absolutely engorged and every time the calf tried to latch on mom would move away.  Dana and her spouse ended up milking another bottle worth from mom (a two person job as she obviously was tender and didn’t want her udder messed with) and giving it to the calf, and got her up to walk.  For a six hour old calf she certainly acted much more like a newborn.  Being born during the peak of an April snowstorm certainly set her back.

Because MaryAnn was so engorged they ended up milking her at nearly 10 pm, just to relieve the pressure before she got mastitis.  They were also discussing the probability that this would end up being a bottle fed calf and who would take the first two hour feeding shift.

I still don’t know the outcome of the story, being a working farm it’s hit or miss with calling them.  I am hoping for the best with the calf.  To lose two babies on the same day, after being born on the same day, would be more tragedy than seems reasonable even for a small farm.

Yesterday was not a good day at all.